Taylor Green and her statements 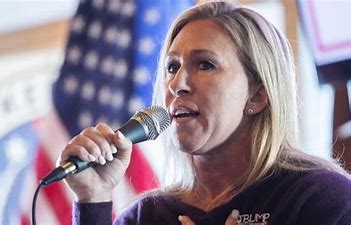 Studying politics in high school may seem boring, but it is important. Presidents like Barack Obama, Jimmy Carter and Ronald Regan are popular, but what about senators? Have you heard of Senator Marjorie Taylor Greene?

When it comes to her views, there are a lot of controversies she has stirred up. Joe Biden is currently the President of the United States, however, Greene says otherwise. She is a strong Republican supporter and the moment Biden took office, she attempted to impeach him stating, “Trump would be back in office by August of 2021”. That didn’t happen.

When it comes to gun rights issues, she visited a rally in September of 2020 and espoused that she would always protect gun owners’ rights and would not vote for any laws making it harder to possess guns. She actively advocates for less restrictions.

What about sexuality? She creates serious controversy there. The LGBTQ+ is known for having controversy across the internet and the world as a whole. Agreement, disagreement and the in-between. Greene’s position is very negative towards rights for the community. She co-sponsored the “Old Glory Only Act” so she could ban U.S. embassies from flying pride flags. She also tried to block the Equality Act while being debated in the courthouse. She even wrote a transphobic poster that stated “There are TWO genders: Male and Female. Trust The Science!” which she targeted at Representative Marie Newman for having a Transgender daughter.

What about her views on cultures? When the BLM movement began, she called it a “Marxist group”. She even compared them to the activists of the White Nationalists at a “Unite the Right” rally in 2017. In fact, she even compared the BLM activist movement to the KKK and called them “The most powerful domestic terrorist organization”.

Her conspiracy theories are what might be the most over the top ones. She has made theories like: “Clinton is responsible for a series of murders; the Government orchestrated the 2017 Las Vegas shooting; multiple school shootings were ether staged or false flagged; the 2018 Camp Fire was caused by “Jewish space lasers”; and the most ridiculous of all being that the 9/11 attack on the Pentagon was fake”.

To be honest, she acts as a character unbecoming to the political arena.  However, if studying in class offered the wild readings of a Marjorie Green, politics would not seem boring.