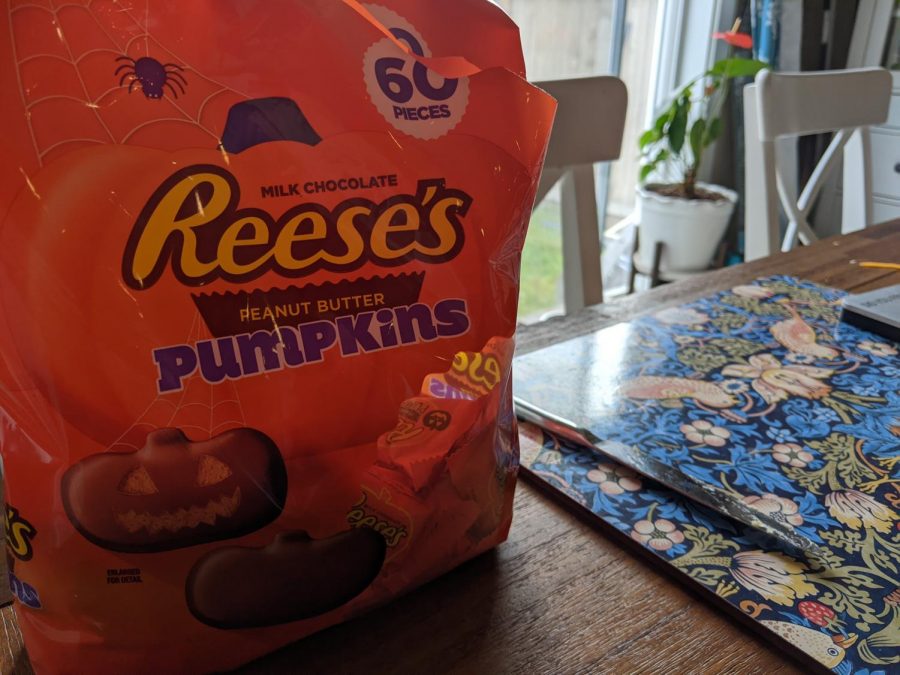 When the wrapper around a Reese’s Pumpkin is opened, it shows that it doesn’t have that stupid paper bit around the item itself, meaning that you’ll have less to throw away, and less to peel. This change is most likely due to the change in form factor, as the pumpkin shape is far more structurally sound than the classic ridged cup shape.

When you eat the Reese’s Pumpkin, expect to be able to finish it in a single bite. I would recommend eating it in this fashion, as the chocolate exterior is very prone to melting in your fingers. Additionally, eating the Reese’s Pumpkin whole means that you’re able to get the full ratio of chocolate to peanut butter filling, meaning that you get the specific mix of flavors that the Hershey Gods intended.

Speaking of flavor, when you first bite into the Reese’s Pumpkin, you taste the sweetness of the milk chocolate exterior. Then, as you chew, the flavor of the peanut butter filling becomes more apparent, and adds a slight bit of saltiness to enhance the sweetness, and make it far more appealing than if it were just straight sugar. The consistency of the Reese’s Pumpkin is also very soft, as if you were biting into a truffle, perhaps from See’s Candies.

Overall, the Reese’s Pumpkin is stellar, and much less of a pain to eat than an average Reese’s Cup. If you don’t have to contend with a peanut allergy, these are definitely candies you should hang onto when trick-or-treating, and excellent choices when handing out candies. An allergy-free alternative to supplement these is also recommended.

That being said, can we talk about how to pronounce these things? It’s “Ree-says”, not “Ree-sees”. It boils my blood when people pronounce Reese’s Pieces “Ree-sees Pea-sees”. The guy’s name is Reese, and it’s his candy. Therefore, it’s Reese’s Cups and Reese’s Pieces, not whatever the heck you decide to contort it. Thank you.